What is DHT (Dihydrotestosterone)? - Should You Block it?

There is a general misconception surrounding DHT 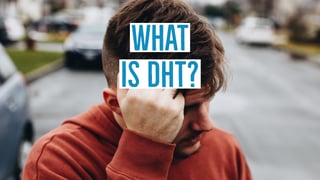 which leads most people to think that it is simply a negative androgen byproduct which sole purpose is to increase prostate size and make your hair fall out.


But is this really true or is there more to it? Is it absolutely necessary to eliminate DHT from your body or would it be more prudent to reduce its levels and keep them under control?

Let’s start by clarifying what DHT is, and by explaining why in fact it might be better to merely reduce its levels and keep an eye on them.

DHT (Dihydrotestosterone) is an androgen hormone produced in the primary reproductive organs of both men (testes) and women (ovaries). As well as secreting hormones like the androgen hormones, the testes also produce sperm while the ovaries are also occupied in the production of egg cells.

Androgen hormones are male sex hormones that primarily influence the growth and development of the male reproductive system. They are responsible for the biological characteristics of males, including increased muscle mass, a deeper voice and body hair.

Testosterone is the primary androgen secreted by the testes and acts as a precursor (a prohormone) in everything that is not muscle, particularly in the brain, skin and genitals. It is converted to the active androgen DHT by the action of the enzyme 5-alpha reductase (5-AR) and is mainly formed in the prostate gland, testes, adrenal glands and hair follicles.

Why is DHT important

Each day almost 10% of the testosterone produced is converted to DHT by different parts of the body for example the skin, the scalp, as well as the testes and the prostate in men and the ovaries in women.

DHT is responsible for the start of puberty in boys, causing the developments of male genitals: penis, testes, and scrotum as well as the growth of body and pubic hairs. It also causes the prostate to grow and, combined with testosterone, is thought to cause the expression of male sexual behaviors.

It basically makes a man, a man - male, assertive and dominant.

In females, it is thought to help determine the age at which girls begin puberty, as well as being responsible for the growth of body and pubic hairs in this phase of womens lives.

For the most part DHT is essential to the process of hair growth, but when you are predisposed to androgenetic alopecia (male and female pattern hair loss) it is detrimental, particularly to hair growth in the scalp.

5-alpha-reductase (5-AR) is the enzyme that converts testosterone into the much more potent androgen, DHT.

There are two versions of 5-AR:

Type 2 is the one considered most important in the process of hair loss because if 5-AR levels in the scalp increase because of male or female pattern hair loss, more testosterone will be converted into DHT, resulting in even greater loss.

Though most people are not affected by DHT in the scalp, those who are genetically predisposed to baldness are quite sensitive to DHT. When DHT attaches itself to the receptor cells of hair follicles, it prevents them from receiving much needed nutrients such as proteins, vitamins, and minerals. The absence of these vital substances causes the follicles to shrink, restricting their ability to produce hair growth. As a consequence the hair will start thinning until eventually it stops emerging all together.