Laser Hair Therapy and How to Use it Correctly for Hair Growth: Presented by William Gaunitz, WTS

William Gaunitz speaks in Chicago Illinois at the International Association of Trichology Conference 2016. William spoke about the use of low-level laser therapy for hair growth as well as best practices to ensure the highest quality of end result.

William also discusses overstimulation and risks of laser as well as use of product, detoxification, and minoxidil to improve the results of laser hair growth.

This 30 minute video is extremely educational and takes the reviewer through a history of low-level laser therapy devices in the United States. If you are interested in learning more about the level laser therapy for hair regrowth, you should watch this video and it's entirety.

To learn more or to hair a consultation regarding Low Level Laser Therapy for hair growth, Book a Free Consultation.

Why is the Erchonia THL-1 better than the Hairmax Lasercomb?

This is a very common question. Without having intimate knowledge of exactly how laser hair therapy works, it is difficult to explain this fully. But here we go. 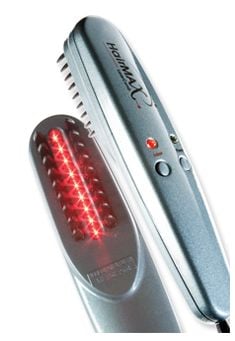 First of all, the Lasercomb is one diode reflected through a prism in nine rays. The Lasercomb is the only FDA cleared hair growth laser on the market. They have produced clinical evidence that their device is capable of showing some improvement over placebo in clinical trials. It took 4 clinical trials to produce this result. I have personally used the Lasercomb in early 2001. It simply was not powerful enough to do anything for me. I returned the device for a refund after 5 months.

With this being said, the laser comb is using a diffuse light principle to regrow hair. This is important. This is same type of energy that we use in-clinic but at 61 times less the strength. By using diffuse light you are using unfocused energy. This energy is weaker, but is more effective with a multitude of diodes for growing hair on most people. This would be similar to comparing a flood light to a spot light. A flood light gets weaker as the light flow outs in many directions, whereas a spot light will remain focused in a concentrated area. Beside the wavelength, this is core difference between the Lasercomb and THL-1 device. The THL is concentrated, where the Lasercomb is not. 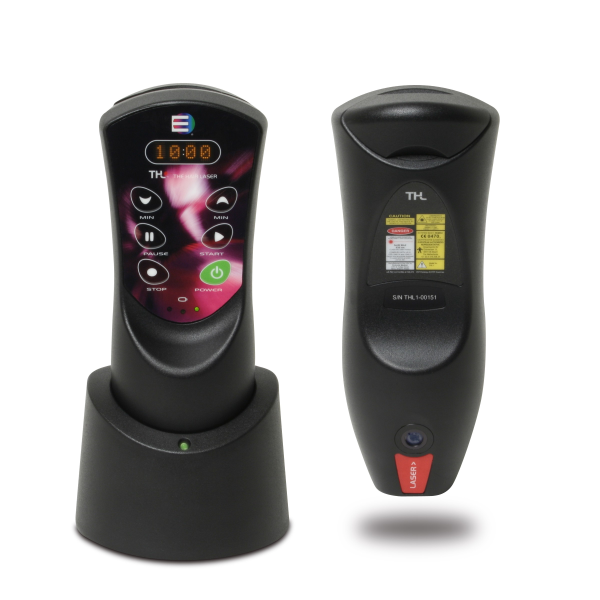 THL-1 is a single focused line generated beam of light at 635nm and 5 milliwatts of power. This single line generated beam, because it is focused, can deliver up to 100 times more energy than a comparable diffuse light diode. This means that less treatment will produce a more quality result faster. Or in many situations, produce a result far superior to that of the Lasercomb. The THL-1 is actually so powerful that if you use it more than 6 minutes per day you can actually cause over stimulation. For more information on overstimulation, read my blog article here. http://laser.hairgrowthcenters.com/?Tag=X5+Hair+Laser+Reviewed Here is the blurb.

"Most commercially available handheld lasers only use 5 - 9 unfocused diffuse light diodes. This simply means that there would not be enough energy available to create a notable difference in most hair loss situations. Different hair types require different levels of energy to see results. Dark to black hair usually can only tolerate 30 diodes of 635nm (3.5-5mW) energy at 2 x per week before overstimulation. Light to blond hair can tolerate almost double that at 61 diodes of the same energy 2 x per week.
Overstimulation can occur in anyone who has received too much laser treatment for their particular situation. Overstimulation can cause a stalling of hair growth (slow growth), scalp pain, and in many cases rapid shedding of hair in the treated area. It is very important to use the correct dosage of energy for every individual in the correct intervals.
With that being said, it is also very important to get enough laser energy to ensure proper hair growth. For a diffuse light diode handheld device to really create a positive impact on the average hair loss case, the laser device would need to at least contain 15 diffuse light diodes. You must also note that not all diodes are created equal as well. You must have a quality built device to maintain adequate and sustained power supply to each diode to ensure a quality dose of energy."

Clearly overstimulation is not what we are trying to achieve. The THL should be treated like a medical device and used only as prescribed which is 4 minutes daily (2 minutes on the front of the scalp, 2 minutes on the back).

The 635 nm wavelength is important as well. All of our in-clinic devices use 635nm diodes at 5 mw and ALL of our before and after pictures on our website have been produced using this energy (http://www.hairgrowthcenters.com/hair-regeneration.html). Erchonia Medical, who manufacturers the THL-1 laser, sell a 2 diode 635nm line generated unit for $16,000 for medical use only. Erchonia has more FDA approvals than any other medical device company for low level laser therapy. The PL-3000 device, practically identical to the THL-1 except for the exterior (http://www.erchonia.com/default.asp?contentID=122), was the first device to be FDA approved to accelerate wound healing http://www.erchonia.com/downloads/k012580.pdf.

Why is this important? It proves the strength of a line generated single diode device as well as its effectiveness.

What does wound healing have to do with growing hair? The main mechanism for improved hair regrowth by low level laser therapy is its ability to improve cell regeneration and reduce inflammation. Normally hair follicles that are being miniaturized due to androgenetic alopecia are suffering from massive inflammation at the follicle receptor caused by DHT. By decreasing inflammation and expediting cell regeneration, your hair follicles can recover and begin to grow normally again. The more effective the energy, the more hair you will grow. DHT must be reduced for any laser device to make a dramatic difference in your hair growth. That is why all of our programs are sold with topical and internal DHT inhibitors.

In conclusion, the THL-1 is far more effective at delivering the quality energy that is required to produce a dramatic result. The other benefit to using the THL is that you only have to use it 4 minutes per day. The Lasercomb requires 2-3 treatment at 15-30 minute per treatment to produce a result.

I hope that this was helpful. Feel free to contact me directly if you have additional questions.